Stroma presents a major tribute to New Zealand’s most important and influential composer, Douglas Lilburn, on the day of his 100th birthday.

Nine Echoes features nine new works written by New Zealand composers, each work responding to one of Lilburn’s Nine Short Pieces for piano, which will be played by Emma Sayers. The new pieces are as diverse as the composers themselves, who range from major figures such as Eve de Castro-Robinson and John Elmsly to talented postgraduate students such as 21-year-old Stephen Clothier.

Nine Echoes has been funded in large part by donations from music-lovers using the crowdfunding website Boosted, as well as receiving grants from the Lilburn Trust, Wellington City Council and philanthropist Dr. Jack C. Richards. Anyone who loves Lilburn, or wants to experience new contemporary music in small, perfectly-formed bites, should attend.

The Centre for New Zealand Music (SOUNZ) will partner with Stroma in presenting this event, and is providing a birthday cake and bubbles. 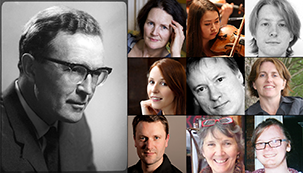